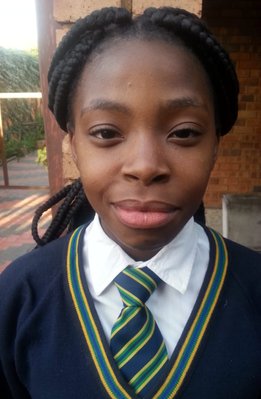 "Dear Sponsor
firstly I would like to say a big thank you for your tremendous help and regard with school no amount of thanks can measure up to what you were doing for me.
This year has been difficult for everyone worldwide regarding to the Corona virus. There were many that lost family members, many that lost their jobs ,the economy dropping drastically as well as learners not being able to go to school because the number because the number of people with the virus was increasing so quickly we were also forced to go into the lockdown, which affected many because everything had to come to stop. In regard with school we all were worried and shocked as to how we would go on now, how learning will take place the upcoming exams at the end of the year were they going to be written, are we going to pass since you all had to stay home for quite some time. I decided I had to take a stand since I would be held accountable if something were to happen with my education, I created a time table with all the subjects included and set up a time to see how long I am busy with the specific subject which helped a lot. But if there's one thing I mostly appreciate your help with paying my fees , from that I got more motivated to work harder and did eventually pass this year.
I aspire to do great things in this world ,make my family proud as well as myself. I too want to help other children like you have helped me. we are yet approaching a new year and I ask that you may continue helping me and I will not let you down.
I hope that you enjoy your holidays may God bless you.
With great thanks .
Phatsimo B."